Skip to content
HomeBe Careful What You Wish For 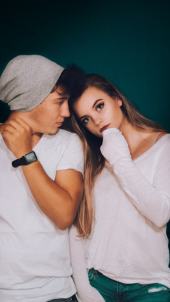 “I wish I could get Tina to notice me,” I said to my best friend, Kevin.

He laughed. “Yeah, well, good luck with that. How does that makes you different from all the other guys?”

Kevin was immune to her charms because he already had a girlfriend. He couldn’t know the pain of my unrequited love.

Tina simply made my sixteen-year-old heart race, and I wasn’t the only one. She was always surrounded by boys. Boys trying to sound funny or wise or bad; boys horsing around to show how strong they were; boys with the courage to ask her out and boys too timid to do more than worship from afar. I was in the latter category.

Shy though I was, I was determined to capture Tina’s attention and I gave it some thought. I wasn’t funny or wise or bad, and I knew it. So, what were my strengths? Well, I made good grades. Yawn. I had my driver’s license but no car, double-yawn. I wasn’t on any sports team, but I did do volunteer work, triple-yawn. I needed to get creative, figure out how to set myself apart from the crowd.

It was while I was working my weekly shift at the humane shelter that a brilliant idea illuminated the right hemisphere of my brain. I was cleaning the puppy cage. There happened to be a litter of almost-Golden Retrievers in the shelter that day, six-week-old balls of blond fluff so cute they made your back teeth ache. One of them had an outsize personality and watching him tumble around with his tiny tail straight up in the air – that’s when it hit me. Girls love puppies.

Sure, my folks had a fit when I brought him home, but I lobbied hard and the puppy was his own best advocate. We became a family with a dog. I named him Buddy.

The next day I raced home after school, collected Buddy and returned to the big oak tree in the park where Tina and her girlfriends held court every day. I jostled my way to the front of the crowd, didn’t say a word, just put the puppy in her arms. She melted.

From then on, Tina singled me out in the crowd so she could see Buddy. I played it cool, kept her wanting more. Sometimes I didn’t show up. Occasionally, I left Buddy at home. Then I caught a virus and was in bed for five days, and whaddya know, Tina actually called me.

“How’s Buddy?” she asked. Not “How are you, you poor sick thing?” Okay, but still she called me. I said Buddy was fine and I was better, thanks, and we’d probably be at the park later that week.

I took the world’s quickest shower and threw on some clothes. Shaky and pale, I met her at the door with Buddy capering around my feet. I tried to ignore my fever chills and concentrate on Tina’s miraculous presence while she concentrated on Buddy.

“Who’s a widdle puppy-wuppy?” she’d coo, as Buddy rolled over so she could scratch his fat belly. “He’s a good doggie, yes he is.” Buddy would nibble her fingers with his sharp baby teeth and she’d squeal. I’d just sit there. Sometimes I’d do my homework.

I tried to engage Tina in conversation, but once we’d exhausted movies, TV and celebrities she lost interest. And much as she said she loved Buddy she wasn’t interested in learning how to take care of him. She just wanted to play with him and show him off. She bought him little outfits and fancy collars. Then she got all three of us matching bandanas and tee-shirts and insisted we wear them to the park. It was a near-death experience for me. The laughter of the cool kids burned my ears and “Arf-Arf” instantly became my new name.

Tina thought it was funny. Beautiful girls can get away with anything. Ordinary guys like me, not so much.  Being with her wasn’t at all like I’d dreamed it would be.

“I wish I could get Tina to leave me alone,” I said to Kevin.

He laughed. “Yeah, well, good luck with that.”

5 thoughts on “Be Careful What You Wish For”