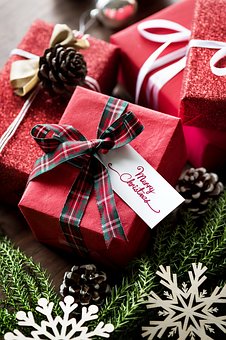 The ladies trooped in from their cars, bearing Christmas gifts and steaming casseroles. Coats and scarves and gloves were shed amid hugs and appreciative sniffs of kitchen aromas. It was the annual Christmas luncheon of the Desk Set, six woman who’d worked together in an office for years and still kept up their friendships in retirement.

“We need a name,” Rachel had said back in the day. “Something catchy.” She looked around the cubicle farm with its rows of work stations. “How about the Desk Set?” It stuck. The Desk Set they were and remained.

They’d shared so many moments  – watched each other’s children grow up, plucked the first horrifying chin hairs together, went from svelte to comfortably plump, from high heels to flats. Traditions grew from long friendship and those traditions kept the group close. One of the most important was the Christmas gift exchange, so when Florrie arrived at lunch empty-handed, the others noticed right away.

“Oh, you’ll never believe this,” Florrie said. “I bought your gifts ‘way last summer and put them away in such a good place that I can’t find them.”

“Did you look everywhere?” Rachel asked. “Tell us where-all you looked. I bet this is just an excuse because you forgot to get us something.”

“No, I promise, I have your gifts – somewhere.”

There was a lot of laughter and teasing about the terrible disappointment and how Florrie wouldn’t get away with it. “We’ll come search your house ourselves,” the ladies threatened.

“Susan helped me look for them,” Florrie said. “We just turned the place upside down, but she couldn’t find them either.”

Susan was Florrie’s daughter, and the group immediately sobered. They knew Florrie had been truly desperate if she’d involved Susan. They all tried to hide the dues they were paying to the aging process from their adult children. Objects that simply disappeared were not new to this group. It happened with distressing frequency, and was one of the things they preferred their offspring not to know. It might lead to unwanted conversations about the advantages of downsizing and how exercise improves mental acuity.

The indignities of aging were simply part of life now. They’d long ago agreed that the only thing to do was to laugh about it, so they proceeded to give Florrie a hard time.

“You could have gotten us something else,” Rachel said, and the others nodded.

“But there wasn’t time. I’d have had to shop at the Quik Trip on my way over. You wouldn’t have like that.”

They knew each other so well; they knew exactly what would bring delight. Fragrant soaps, soft throws, special teas, something pretty for the Christmas tree. Nobody spent much money, but everyone got five presents to open – charming, indulgent items they’d never have bought for themselves. It was their favorite part of Christmas.

“I’ll find those packages eventually,” Florrie promised. “Next time we get together, I’ll have them for you. It’ll be even more special then, like an extra surprise.”

“Just make sure you don’t save them for next year,” Jean said. “We want new gifts next year.”

Despite their best intentions, it was hard to get together. Days filled up with grandchildren and doctor appointments, volunteer work, vacations, household tasks and errands. It was July before the Desk Set managed to schedule another lunch, but it didn’t matter because they always took right up where they’d left off.

Florrie was late and there was some speculation around the table about whether she’d found their Christmas gifts and would remember to bring them this time. There’d been a flurry of e-mails reminding her, so when she arrived seemingly empty-handed again, looks were exchanged.

“What?” Florrie asked, intercepting the looks.

“Where are our gifts?” the group demanded. “Did you find them?”

“Yes, and I brought them. I don’t know, though; they seemed like a good idea at the time, but now I’m afraid you won’t like them. After such a build-up, you might be disappointed.”

Florrie scrabbled in her enormous purse, finally coming up with five small, flat packages which she handed around. The ladies attacked the wrappings without the usual exclamations of “Oh, cute paper!” They’d waited six months, after all. Nobody cared about holly paper now.

One by one, they held up their identical presents for inspection. White enamel frames painted with blue forget-me-nots enclosed shining reflective circles. The circles caught the light as the women examined them.

Rachel looked up in puzzlement. “They’re lovely, but mirrors? At our stage of life, you’re giving us framed mirrors?”

“No, I’m giving you pictures of my best friends.”

5 thoughts on “The Desk Set”