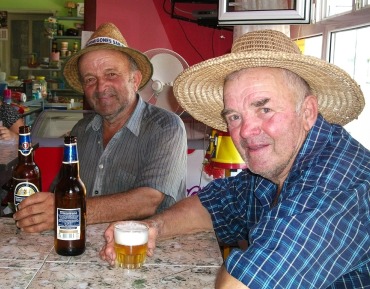 “Yeah? A bar’s a good place for that. Are they deep thoughts?”

“Sorta. The older I get, the more my thoughts turn to the past and all the stupid things I’ve done. I guess it’s an age thing. You know what I need?”

“What’s that, besides another round?”

“A big red stamp that says IDIOT! I could use it on so many of my memories. Maybe if I stamped ‘em, I could forget ‘em. Pretty sure I’d need an extra ink pad, though.”

“What did you do that was so bad?

“I wasn’t a criminal or anything like that. I was just an idiot. Still am, I guess.”

“Well, the first idiotic thing I remember doing was back in first grade. I became convinced that the girls’ bathroom must be really special. We all lined up, boys and girls, for bathroom breaks, and the boys would file into their bathroom, and the girls into theirs. I wanted to see what those snotty little girls were up to in their private bathroom, so I sneaked into the girls’ line. Caused quite a stir, screaming and all. Little girls sure can scream.”

“I started young, and that was just the beginning. I have a genius for being stupid. There was that time in high school when Izod shirts were the rage. My parents thought it was a waste of money to pay extra to wear some guy’s trademark, so I drew crocodiles on my shirts with a green felt-tip marker. They looked pretty good, too.”

“The marker ran in the wash; everything I owned was green. That’s why people who knew me in high school still call me Croc.”

“That’s only kid stuff, though. No reason to be so hard on yourself.”

“Like I said, just the beginning. It got worse. There was the time I introduced my wife to my boss, but I called her by a former girlfriend’s name. And once I went to a party in cut-off jeans and flip-flops because I thought the Dressy in Dressy Casual meant women wore dresses and men were casual. That was before I got married, needless to say.”

“We’ve all done something like that. Women think up those codes to trick us.”

“I don’t shy away from the classics: I’ve walked into a job interview with toilet paper stuck to my shoe, fell in public and broke my wrist, but was so embarrassed I pretended it was funny, ‘replied all’ with insulting comments about one person on the distribution list…Oh, my God, there’s no end to my need for the IDIOT! stamp!”

“You’ve got me thinking now. I remember when I’d had maybe one or three too many and told my priest a really dirty joke. I thought, in my inebriated state, he’d find it hilarious because it began with, ‘A priest, a minister and a stripper walked into a bar.”

“He didn’t think it was funny?”

“He invited me to come to confession.”

“I got into a stranger’s car that looked just like mine and then couldn’t figure out why my key didn’t fit. I was still puzzling over it when he opened his car door.”

“You think that’s bad? I walked an entire parade route with my zipper down.”

“Well, I sat on a woman in a dark movie theater.”

“And I asked directions from a blind man.”

“Top this: bit my dentist.”

“On purpose? How old were you?”

“I asked my mother-in-law how she was doing with her sensual tremors. She said, ‘It’s essential tremors.’ I never knew a voice could be so icy. Things haven’t been quite the same between us since.”

“Tough to beat that, but how about this: I gave my wife a vacuum cleaner for our silver anniversary.”

“Oh, yeah? Well, I went through the car wash with the back window down. In my wife’s car. I was going to surprise her. She was surprised.”

“Okay, hold my beer. Here’s one you’ll never beat. You know how I always carry little zip-lock bags and pick up after my dog when we go on walks?”

“Yeah, yeah. So one day I put a bag of poop in my coat pocket, just until I got home.”

“Forgot to take it out, wore the coat to church. Reached in my pocket for a couple of bills, pulled out the bag instead and dropped it in the collection plate.”

“Really, there’s nothing you could say to explain that one. What happened?”

“I got invited to confession, too. And my church doesn’t even have confession.”

“Gotta admit, that one was the winner.”

“Yep. The worst thing is, being an idiot can’t be fixed and it seems to get worse with age. Hey, where you going?”

“Gonna stock up on red ink pads. Want me to pick you up a few dozen?” 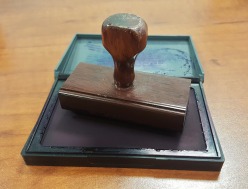